Anna-Maria Pfab
“This forum activity is an opportunity to discuss project work produced during the break.

In the space below, please use the following structure to tell us where you are with your projects:

Introduce the topic of your project
Introduce the area of concern or your angle
Summarise work made in previous modules
Describe the intentions you had for the break
Share work produced during the break: three – five images is enough
Make sure to look at the work of your peers and comment, help, brainstorm together.”

week 1- My project and work achieved in the break

My project is Beauty and the Beach…

The three dots signify that it is not all that the words in the title may convey as I am photographing debris, including plastics, on beaches and waterside locations. Having monitored in situ and collected some rubbish from various locations in Devon, Cornwall, London and now the Netherlands I am starting to think about how to process, present and display in ways that capture attention.

The visit to Amsterdam and Unseen gave me some ideas as did my subsequent visit to the Dutch seaside where I found a huge set of billboards on a public walkway at the beach all showing data and images of the damage to animals and the environment that debris can cause. Several images promoted taking rubbish off the beach whether just visiting or attending a beach clean event. One of my ideas in my proposal was to do something similar at the entrance to beaches and in city centres in Devon and Cornwall so finding such a display has been helpful.

I have started to experiment with processing but as yet I only seem to make the images interesting and to invite discussion about the back story but with no impactful message to avoid littering in the first place.

In July I attended the 5 day Adobe Photoshop course at Falmouth. I have not spent as much time practicing what I learned over the break as I had hoped. However, I have managed to visit more beaches and waterside locations both taking visitors and on my own. I have also attended two formal Marine Conservation Society/National Trust beach cleans recording and collecting debris. On each visit I have found debris or wildlife or views that I had not “seen” before. I am keeping an open mind as to the final direction and focus of the project as it is offering up so many possibilities.

Landscape: In Amsterdam I presented a landscape image taken on one of the beach cleans, this having been taken because I liked and wondered about the structure in the foreground. I am planning to gain experience as an “apprentice” next week and in December with a local landscape photographer. Products: I attended a one day workshop on Product Photography on 25th August at Plymouth College of Art and Design with the intention of improving my ability to present my beach finds. Interestingly I was the only “photographer”, others were producers of things wanting to take better images, mainly on phones, for their websites. Hopefully the contacts I made will lead to some collaborative work.

Portraits: I am pleased to report having taken an image of a person (with their permission) facing me. My previous images of people have tended to be at a distance or with people with their backs to me.

Wildlife: I am still drawn to my pre course love of nature and wildlife photography albeit mainly associated with watery locations now. This image was taken on the same Dutch beach just after dog walker passed me. It is a seagull dive bombing a seal for the fish s/he had caught. 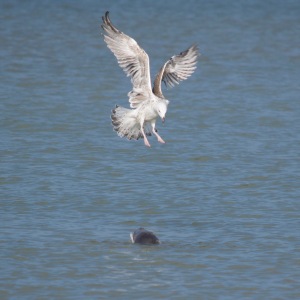 Throughout this module we will be asking you to carry out activities from The Photographer’s Playbook. All of these activities are carefully selected and aim to make you think about your practice and where it might be positioned in a professional context.

This week’s activity is from Michael Christopher Brown, an American photographer represented by Magnum Photos. He has gained an international reputation, especially for his documentation of the 2011 Libyan Civil War, which was published in a monograph titled Libyan Sugar, by Twin Palms Publishers in 2016.

“For much of my career, photography was more of a way to make money than a compulsion. I spent a lot of time communicating ideas that were not my own. Two years ago, during the Libyan Revolution, I began taking a more honest path with regards to photography. It had to do with finding a voice. An interesting exercise that anyone can do is to take one photograph per day for a week. The idea is to be focused enough to only photograph what is absolutely necessary. What are the seven pictures that not only define the week, but yourself? What if you were to die next week and these were to be the last seven pictures of your life? This exercise can be an important analysis of the self in relation to life and photography.”

Post your seven pictures in the forum space below and discuss what you have discovered.

I have presented my seven one a day progress in Keynote not having used this format before. Please click on the link below to see my response to this challenge.

One image a day holds the photographer at bay!