The side:dish publication for Landings 2018 was published in time for the 17th August launch. Our work is done. Thank you Ant, Andrew and Gary for the experience.

Jo Dennis’s work is of interest to me in a number of ways. She photographs well-used and deteriorating spaces, incorporates painting and creates installations. I also photograph man-made things, albeit on a much smaller scale, and create images and have just added an installation with my exhibition 17-24th August 2018. We both look at deterioration and erosion and ‘reframe’ what we see.

“The images of the walls become ‘found’ abstract paintings – in turn, the works become a record of the time that has eroded these surfaces and reveal the domestic, un-fantastic banality of everyday existence. For Dennis there is a poetic profundity to this erosion. Her composition and cropping of photographs, allied to her paintings and sculpture, together expand these ideas using a process of abstracting and reframing imagery.” (Sid Motion Gallery 2017)

Her multi-image multi-surfaces installation is brought together using painted lines that appear on some of the images thereby making a physical connection tying the collection to a singular theme.

When I view her work I am struck immediately by her use of limited colour palettes and the consistency in the aspect ratios and sizing of individual and small group images which bring the subsets of the series together.

In contrast I feel my work is still at a messy experimental stage, each piece having its own life, contrasting and sometimes clashing colours and shape and size being determined by what most suits the subject matter rather than what might make looking at the images easier.

Although I divided my images into three types placing each on a separate wall of my exhibition there remained a certain higgledy piggledy feel about each one. Clearly I need to address these areas, not simply to feel I am ‘conforming’ to unwritten rules of consistency and continuity that date back to analogue times (e.g. Cotton 2018: 219-221) but because I want to find a way to maximise the receiving of the narrative I tell through my images.

Beauty and the Beach… opened yesterday with a lovely soiree and will run until 24th August. Also on line at Landings 2918 http://www.landings.space for a year.

My 10 tips on mounting an exhibition ( which may be obvious to some but could also be helpful to others):
1. Think about potential audience(s). The context for mine is a three sided ‘booth’, one of several displaying the work of artists, in a working artist’s studio that also serves the community as a shop, post office and cafe. Based on the diversity of local and tourist custom in this area I included a range of images from seascapes to ‘abstracted beach debris’.
2. Consider how the images are displayed. I selected three groups to be placed on each of three walls: seascapes and finds that clearly identify what the subjects are, beach finds that start to intrigue through use of light, textures and tonal range and beach finds that have varying degrees of digital darkroom work and need closer viewing to understand what they are and how they were made (camera, scanner and cyanotype).
3. Decide what else to include. Products: I made products on varying surfaces to see how my images might look on glass, china, in acrylic, on hessian and towelling fabric. Incorporated into the exhibition of images as an ‘installation’ these have added interest and potentially value at several levels. In addition to encouraging a ‘double take’ and potentially enhanced impact between image on the wall and the product where the image has been presented in the two forms, they can strengthen the message you wish to convey, show a different perspective (e.g. ‘recycling’) and present items considered aesthetically pleasing and an object of discussion in their own right. Props: In addition to newly created products I included props to ‘set the scene’ reinforcing both raising awareness of beach debris and to show original items that featured in some of the images.
4. Prepare images and products well in advance in time for faults to be addressed, particularly if dependent on others (e.g. for printing and making products).
5. In the weeks leading up to the opening plan, discuss, shape and confirm arrangements for publicity, financial transactions, opening event and hospitality, and whether you need to be present during opening times or whether the event is ‘hosted’ by another on your behalf.
6. Develop a hanging plan according to the options available at the location and be prepared to adapt according to circumstances on the day.
7. Allow for doubling and even tripling your initial estimation of the time setting up will take.
8. Have an assistant for practical and moral support when setting up.
9. Expect the unexpected. Opinions, likes and dislike vary according to many factors, nature, nurture, life experiences and importantly neurological sensory and emotional sensitivity. As authors of ‘images’, having lived with and become very familiar with them over time, our attachments can be quite different to the response and relationship others form with an image.
10. Keep energy and wellbeing levels up during setting up and opening days and enjoy showing your work to others!

This week a tutor noted that I had made a ‘paradigm shift’ in my photographic work. My immediate feeling was one of excitement as if it was a positive accolade which was swiftly followed by thoughts of why, what, how and whatever it is others are seeing in my work, can I keep it up? It certainly is not related to the technical prowess in producing images that are not blurry in parts or whole, that conform to rules of thirds or Phi, that tell a story and feel contained within the frame etc. However, linking together recent comments in webinars from tutors and colleagues and family and friends there is something about my recent images that apparently ‘intrigues’ others and entices them to look for more than a few seconds seeking decoding and explaining as their eyes and brains run through algorithmic processes in deciphering what is in front of them. But what is a paradigm shift and is it inherently a good thing? Two defining explanations I found helped me to realise what I have been doing in the past few weeks.

“…a time when the usual and accepted way of doing or thinking about something changes completely.”

“Seeing that vs. seeing as
In addition to ambiguous sentences, Wittgenstein discussed figures that can be seen and understood in two different ways. Often one can see something in a straightforward way — seeing that it is a rabbit, perhaps. But, at other times, one notices a particular aspect — seeing it as something.” 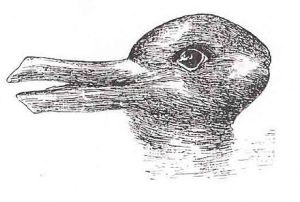 “The duck-rabbit, made famous by Wittgenstein”

Subconsciously I have abandoned rules and experimented more freely than ever before with image production inspired by course activities and playful literature (Higgins 2013; Fulford and Halpern 2014; Antonini, Minniti et al. 2015). I think what I have been doing is moving from ‘seeing that’ (i.e. spotting and depicting rubbish on the beach which everyone quickly recognises) to ‘seeing as’, thereby becoming aware of other ways of considering what I am looking at.

HIGGINS, Jackie. 2013. Why It Does Not Have To Be In Focus: Modern Photography Explained. London: Thames & Hudson.

I am thrilled with this creation, the production led by Andrew Barrow in consultation with myself and Ant Prothero. Inspired by an earlier viewing of using a treadmill while viewing an art gallery encapsulated in a minute, this emulation ‘showcases’ and gives a flavour or taste of the style and talent of those associated with the MA Photography at Falmouth University. The main course  can be found in full at http://www.landings.space from 17th August 2018 along with a ‘side:dish’ publication.

I had thought this would be another quieter week. However, despite my plans for Monday I dropped my activities in favour of joining Ant and Gary and later Andrew in Slack activity. Ant had messaged us to see if we could join him to finalise the publication in the morning. We worked through for 6-7 hours tackling this and an additional task I certainly had not been aware of; creating a Landing (Splash) page from which people could press a button to link to the exhibition page. Using the idea of an envelope we added an address (Landings 2018 exhibition) and completed the design, still using our chosen Wes Anderson palette, with the Royal Mail Packet Ship stamp.

Fine tuning the formatting and chasing better resolution images were features of the day. Although there were breaks of time between communications while changes were made, keeping focussed was tiring but essential to get the work finished and ready for publishing.

The three posters, one for each theme and the video complete with instructions for downloading the full version and placing on instagram (shorter version due to time limitations of this platform), have all been circulated. It is fascinating to see them take on new lives depending on who is circulating them across social media platforms and in their own blogs. Although the publication, now called a side:dish as it accompanied the exhibition page, has not yet been released by Falmouth University, it does feel as though we are letting go, launching products as if sending children off into the big wide world! I just hope that evidence of our parental nurturing on behalf of the course is well received.

Slightly out of order in these posts, these notes were submitted on the course platform during week 8. I am reviewing them now that I have run two workshops. I am feeling more confident with my ability too talk about and engage others in image making.

‘Weaknesses– I prefer to title it: things I have yet to learn/develop or where I do not have natural abilities (and need to collaborate with others)

“In my experience of your comments I think you are great at being encouraging and coming up with really helpful ideas to improve, develop and enhance others photography.  To my mind you would make a great judge of photography.  So, maybe given your communication skills and ideas that a workshop around critiquing participants’ work and finding ways to develop their image making would be a good fit for you.”

How interesting and useful to find that I have played to my strengths in the Landscapes to Nurdles Workshop and some of the skills my colleague identified have come to the fore with this activity. Food for though for future workshops and other types of educational activities, although perhaps commentator and reviewer rather than ‘judge’ at my stage of development!